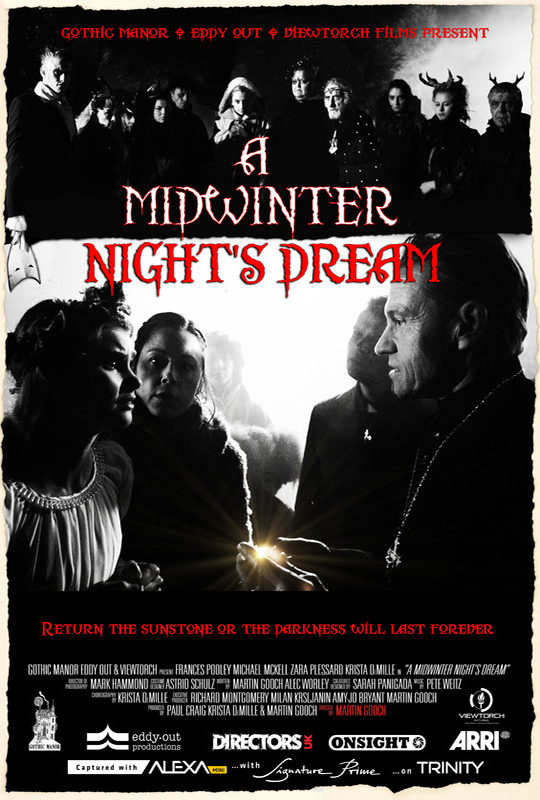 Return the Sunstone or the darkness will last forever.

Every year on Midwinter’s Eve the Sunstone must be returned to the Yew Tree Goddess. Young Morrigan doesn’t want to do it but her mother and the Vicar insist. ​The Yew Tree is ancient… mystical, magical and poisonous. What has it witnessed in its long life; what does it know?​

This magical one-shot short mixes the fantastical with the technical through a base language of dance and movement. AMWND is one of four first-ever winners of Challenge TRINITY — the opportunity to create a one-shot film using top-of-the-range ARRI TRINITY stabilizer equipment. Challenge TRINITY was created in partnership between Directors UK and ARRI, and offered Directors UK members this competition from which writer/director Martin Gooch was selected out of hundreds. Martin hails from the camera department of big budget films before striking out on his own as a writer and director ten years ago. And so Martin was given the chance to shoot a cutting edge one-shot film with the $60k TRINITY stabilizer holding an ALEXA Mini with one 25mm Signature Prime lens, operated by experienced, top-notch TRINITY Operator Will Lyte.

Martin then wrote a script calling for dance and choreography as the predominant mode of communication for the story, to augment the three dimensional conversation in movement that this special stabilizer makes possible. He called on NYC Journey-woman choreographer/actor/dancer Krista DeMille to be his right hand in choreographing this experimental work. DeMille hails from the post-modern dance world of Lucinda Childs, David Gordon, and Ralph Lemon. A founding member of Nicholas Leichter Dance and Eun Me Ahn Dance, DeMille settled right into the avante-garde spirit of the film. Utilizing almost no dialogue, AMWND leaps from the idea of a ‘trinity challenge’ with 3 of everything… 3 acts, 3 speaking roles, 3 vicars, 3 mums, 3 tree Goddesses. The 3 parts to the story create 3 locations which were lit to create a nearly 360 degree playing space both inside and directly outside the church to meet the rigors of the one-shot.

Pushing camera and technical boundaries all 3 of the moving TRINITY axes were used, in addition to the TRINITY Operator moving constantly within the three dimensions. Martin put the unit through its paces: leading the actors, following the actors, parallel movement to the actors, mirroring the actors movement, jibbing up and down, a whip pan, and we even had actors walking backwards in frame whilst focused on the actors that they were talking to… a rare shot, let alone in a one-shot film.

Finally, the team smashed hiring ceilings by casting an actress with high functioning Aspergers Syndrome in one of the leading roles, hiring a female runner who is profoundly deaf, as well as employing over 50% women for the entire cast and crew.

Martin Gooch wrote, directed, and produced so many short films he released a DVD called: I Made a Feature Film by Mistake, comprised of more than 100 minutes of shorts. His short films The Curse of Ian Spatchcock and Arthur’s Amazing Things were winners with BBC Best New Director (2001/2002) which led Martin to direct Doctors (BBC), Hollyoaks (C4) and Spooks Interactive, which won a BAFTA and was nominated for an EMMY.