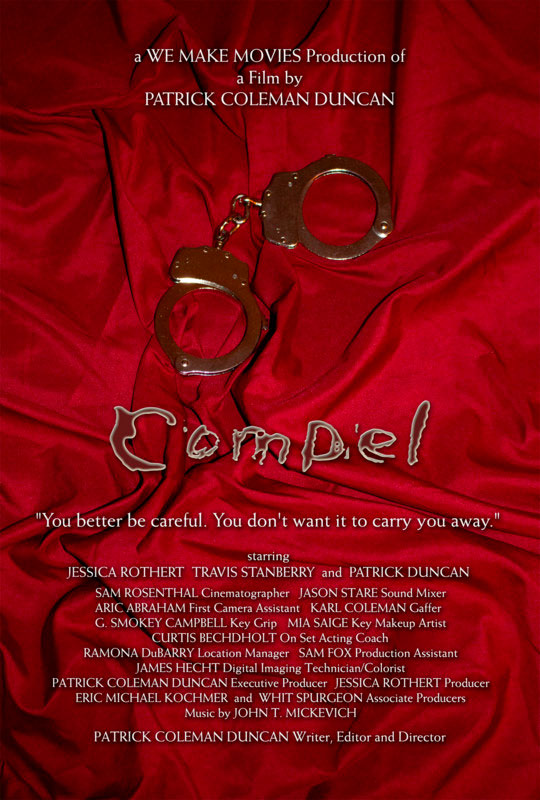 “You better be careful. You don’t want it to carry you away.”

Jessica is recently separated and looking for some sexual intrigue. She brings home Dan, a stranger who may have gotten more than he bargained for when her soon-to-be-ex husband Jeff pays her a surprise visit. The couple airs their grievances as Dan remains on, a captive witness to a scene of pending domestic violence.

A one night stand gone horribly wrong – or does it?

As a filmmaker and actor Patrick has made three consecutive Award Winning short films, JES AND LORA, LIFE’S A PITCH, and COMPEL.

Patrick began his filmmaking career producing, writing, and starring in SO, WHAT’S IN JERICHO? in 1998. JERICHO was an early example of digital filmmaking and raising money by a primitive form of crowdfunding (he asked family and friends for money and promised perks without use of the internet).

Moving to LA in 2000, he wrote, produced and directed the short films HOLLYWOOD, THE HARD WAY, THE SHABBOS BIGFOOT, and A MOCK TIME: A ‘STAR TREK’ WEDDING, as well as several industrial films for UCLA Medical.

He joined We Make Movies, the Hollywood Film Collective, in 2012, wrote and acted in the WMM Challenge winning sketch MISERY DATE as well as acting and editing multiple films for members. For five years he coordinated We Make Movies’ monthly Test Screening Series, a forum to get projects ready for festivals and distribution.

As an editor, he worked on the award winning features, CARBON NATION and ASSISTING VENUS (starring Julian Sands).

As an actor he’s appeared on GUIDING LIGHT, DAYS OF OUR LIVES, and PARKS AND RECREATION. He is a member of SAG-AFTRA and the Television Academy.

He is currently taking his latest project, the Award Winning short Thriller COMPEL to festivals around the world.