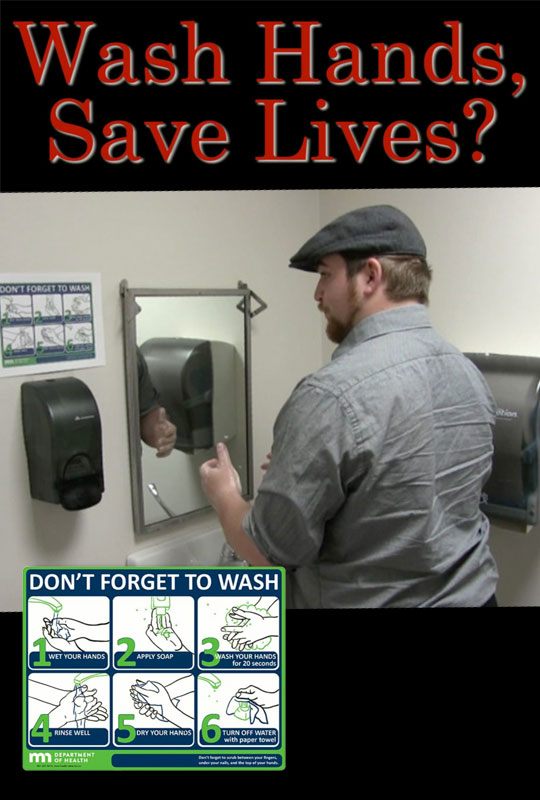 A young man follows directions on the wall to wash and dry his hands. But will it really save his life?

Director Biography – Stephen A. Schrum
212ad4cbf6 headshot
Stephen Schrum, PhD, is Associate Professor of Theatre Arts at Pitt-Greensburg. With a PhD in Dramatic Art from the University of California, Berkeley, Stephen is also interested in digital filmmaking, playwrighting, and podcasting. During the summers of 2017 and 2018, he wrote and directed several short films which can be found on his YouTube channel. As for playwrighting: along with having two monologues from original plays published in anthologies, he performed his full-length monologue, Immaculate Misconceptions: Tales from Catholic School a few years back, and also ago directed the world premiere of his musical Dog Assassin. You can also listen to his podcast, Audio Chimera, on iTunes, Spotify, iHeartRadio, and GooglePlay. See his website MUSOFYR—pronounced “muse of fire”—for more info, and check out some of his written work (plays, poetry, memoirs—including his novel, Watchers of the Dawn—A Steampunk Adventure) on smashwords.com. Schrum is also co-ordinator for the Arts Entrepreneurship Certificate program at Pitt-Greensburg, and is an Associate Member of the Stage Directors and Choreographers Society (the professional union).